How gas works on the Libra blockchain

Note : The Libra* Core software and the Move language are still under development; the information and the terminology used in this document are subject to change.

This post starts a series on gas on the Libra blockchain. The goal of this series is to take you from “I have no idea what gas means” to understanding what gas is and, at a high level, how it works. As the first post in this series, our goal here is to introduce the subject and provide an overview of the design and design goals. In subsequent posts we’ll dig in and explore each area in more technical detail.

Gas is a way for the Move virtual machine to track and account for the abstract representation of computational resources consumed during execution.

In this way, gas is central to one of the most basic and crucial properties we need in Move:

The computational resources consumed by Move programs running on the blockchain are bounded.

Gas is a way to ensure that all programs terminate; it also provides the ability to charge a transaction fee based in part on the resources consumed during the execution of the transaction.

Similarities with other blockchains

Fees for executing transactions were originally pioneered by Bitcoin, and the idea of gas and gas-based execution fees were introduced by Ethereum. The design of gas on the Libra blockchain has benefited greatly from their designs, and in many ways the gas design for the Libra blockchain is similar to Ethereum’s.

The design of gas in Move is motivated by three central principles.

First, Move is Turing complete. Because of this, determining if a given Move program terminates cannot be decided statically. However, by ensuring that (1) every bytecode instruction has a non-zero cost, and (2) the amount of gas that any program can be started with is bounded, we get this termination property for programs almost free of cost.

Second, we want to both discourage DDoS attacks and encourage judicious use of the network. This means that the computed resource consumption should reflect the real-world resource usage as closely as possible. It is important to note that resource consumption needs to be carefully defined; defining the relationships between different dimensions of resources is crucial.

Diving into the details

In this section, we’ll provide a high-level technical overview of gas in the VM.

For the VM to execute a transaction, the gas system needs to track the primary resources that are used by both the network and the VM. These fall into three resource “dimensions”: (1) the computational cost of executing the transaction itself; (2) the network cost of sending the transaction over the network; and finally (3) the storage cost of storing the data created and read during the transaction on the blockchain. The first two of these resources (compute and network) are ephemeral, whereas storage is long lived; once data is allocated, that data persists until it is deleted. In the case of accounts, the data lives indefinitely.

Each of these resource dimensions can fluctuate independently of the other. However, we also have only one gas price. This means the gas usage contributed for each resource dimension needs to be correct, because the gas price only acts as a multiplier to the total gas usage, not usage by dimension. Thus, the essential property that we design for is that the gas usage of a transaction needs to be as highly correlated with the real-world cost associated with executing the transaction as possible.

That’s all on this area for now, but stay tuned for an upcoming post where we’ll dive into the details of this part of the gas system and how to determine the ratios between different resource dimensions in the Libra blockchain. Now, let’s take a look at how gas is implemented in the VM. 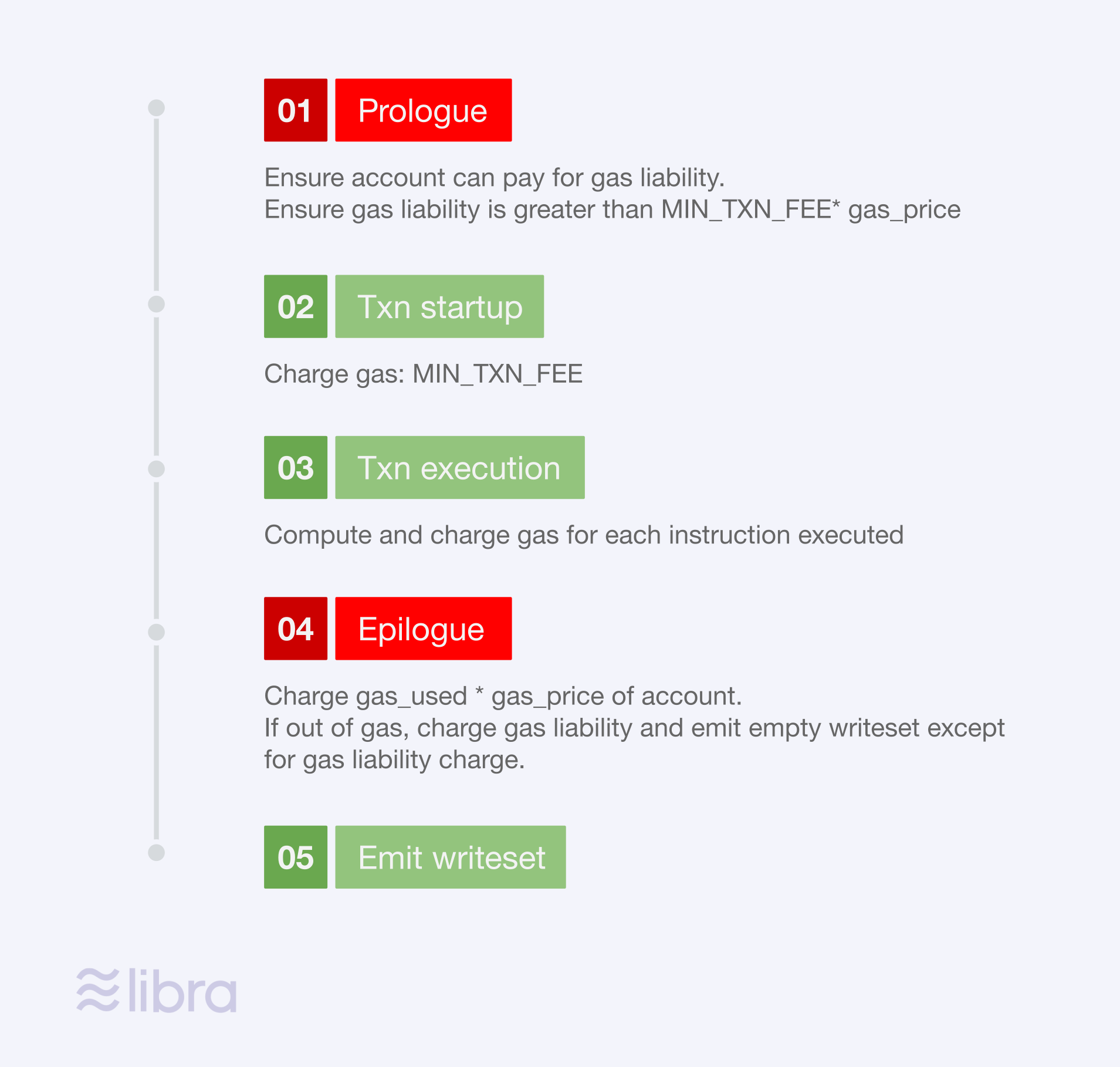 Note in the diagram that both the prologue and epilogue sections are marked in red. This is because both of these sections of the transaction flow need to be unmetered:

Taken together, this non-metering of both the prologue and epilogue requires the MIN_TXN_FEE to be enough to cover the average cost of running both. This is fairly straightforward to determine since metering must be deterministic and since both of these are relatively simple pieces of code that don’t perform any complex operations.

In this post, we offered a high-level overview of the design space around gas in the Libra blockchain. In future posts, we’ll explore each aspect of gas in further technical detail.

Endnotes
[1] This will be discussed more in the upcoming posts on the distribution of transaction fees and the economics of gas and transaction fees.
[2] Along with the deduction of the gas liability, the sequence number of the account is also incremented.

*On December 1, 2020, the Libra Association was renamed to Diem Association.